London Fire Commissioner Ron Dobson has praised people’s patience while firefighters dealt with the Holborn fire – a fire that the Commissioner says demonstrates just how complex London’s environment can be.

The Brigade’s fire investigation team has completed their initial assessment and believe the fire started due to an electrical fault in the Victorian tunnels running underneath the Kingsway. This damaged an eight-inch gas main, which ruptured and fuelled the fire. Investigators found that the 10 foot deep tunnel was well maintained and there was no sign of deliberate firesetting.

Camden Council has led on the work to get businesses and residents back in their properties and most of Kingsway has now reopened to residents, businesses and pedestrians. Restrictions to vehicle traffic remains in place along both carriageways. Commissioner Ron Dobson said: “This technically difficult fire shows just how complex London can be and how unseen risks underneath the capital can significantly affect businesses, residents and the day to day running of parts of the Capital.
“We’ve done a lot of work educating people about how they can prevent risks in their home  and this has led to people being safer than ever from fire.
“But this fire shows clearly that there are still hidden risks in London which make the role of a 21st Century London firefighter so varied and show why it is absolutely necessary that our training is amongst the best in the world.
“Thankfully large underground fires like this one, which have such a wide impact, are very rare and seldom cause injuries.” 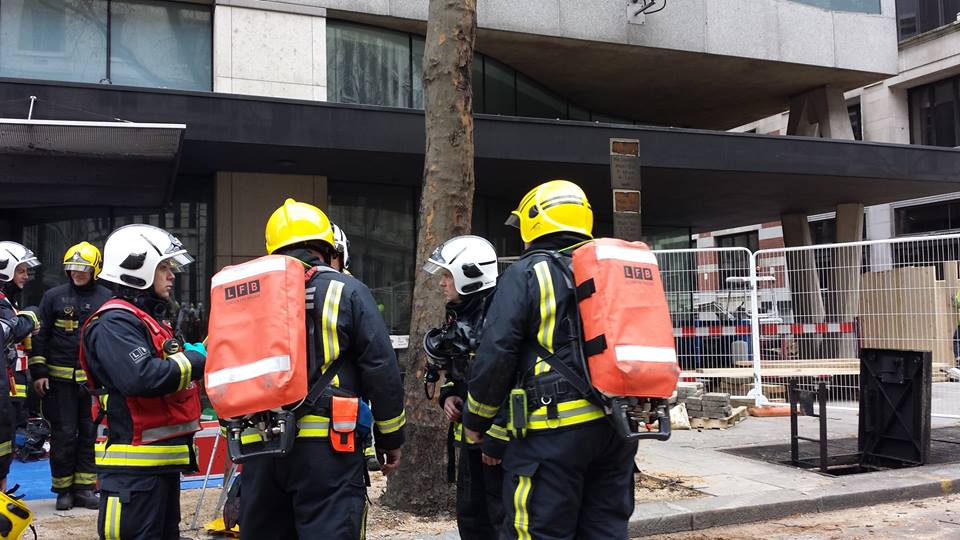 Partnership working
The resolution of this incident relied on close partnership working between two local authorities – Camden and Westminster, the police, UK Power Networks and National Grid and the LFB.
All agencies worked closely together using tried and tested approaches to information sharing and joint working that are well drilled in London.
The National Police Air Service helicopter used infra-red images to locate where the main hot spots were and this provided invaluable information for firefighters on the ground and senior officers in command of the incident. The Brigade also used the Met’s explosive robot to go into the tunnel and provide valuable information for the development of tactics for firefighters to gain access once it was safe to do so. Ron Dobson continued: “We discussed a number of plans which included using high expansion foam but as there was no compartmentation in the tunnels there was no way of knowing where the foam would go and what structural damage it may have caused.

Gas leak fires
“As the gas leak was fuelling the fire it was much safer to contain it while the escaping gas was burning off. If the fire had been put out before it was isolated it could have resulted in a build up of gas over a wide area leading to possible explosions.
“An example is your gas hob at home, turn the gas on and light the ring and it is perfectly safe as long as you monitor it, but put the fire out and leave the gas running and it could result in your house blowing up. “The fire showed the value of multi-agency working to deal with a significant incident that impacted London, safely and without injuries.”