Wildfires constitute a major problem in the country as in all other Mediterranean countries of Europe. The fire season starts from May, peaks in July and August and continues until the end of October. During this period fire use in the open is banned!

To prevent a fire

•    Don’t burn litter or dried grasses and small branches (twigs) during the summer.

•    Don’t burn open-air barbecues in forests or places close to dried grasses or branches during the summer.

•    Avoid open-air works that may cause fire. Do not torch weld, use wheel or other instruments that create sparks.

•    Don’t leave rubbish in the forest. There is danger of ignition.

•    Respect the prohibitive signs of access in periods of high danger.

•    Create a fire break around your house by clearing and removing dried grass, pine-needles, dried leaves, branches etc beyond 10meters of your house.

•    Prune the trees to the height of 3meters, according to their age, and the condition of their branches.

•    Remove all dried branches from the trees and the bushes.

•    Thin the trees in a 5meters distance from your house so that their branches don’t lean on the walls, on the roof or the balconies.

•    Don’t put plastic spouts or plastic sewers of water to the walls of the building.

•    Protect the windows and the glass doors by placing shutters from not inflammable materials.

•    Cover the chimneys and the ventilation pipes with a specific, not inflammable, wire-cable so that the sparks will not penetrate the interior of the building.

•    Keep the fire-wood in closed and protected places.

•    Buy the appropriate fire-extinguishers and take care of their maintenance.

•    Be equipped with a water pipe with length proportional to the area you want to protect.

•    A water tank, a non-electric power pump and a water pipe can protect you from fire. 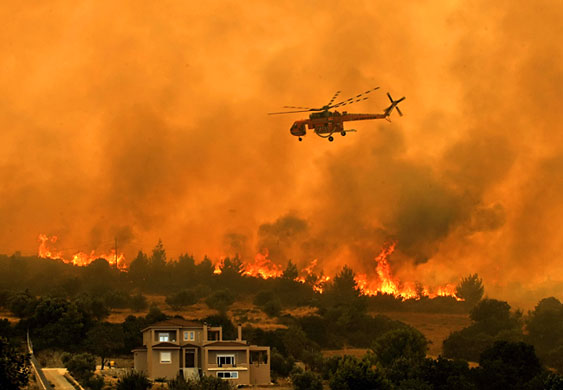 If you see fire

•    Describe the kind of vegetation that is burning.

•    Specify the direction of fire.

•    Don’t hang up before you give all necessary information.

If fire is approaching your house

•    Remove promptly all the inflammable materials from around the building to closed and sheltered places. Their ignition might contribute to spread the fire in the building.

•    Close all the passages (chimneys, windows, doors etc) to prevent fire-brands to penetrate the building.

•    Shut off all the gas and liquid-fuels supplies inside and outside the building.

•    Immediately roll up sunshades from the balconies and the windows.

•    Open the gate of the garden to facilitate the fire fighting vehicle access.

•    Put a ladder outside the building so that someone is able to climb immediately on the roof. The ladder should be placed at the opposite side of the fire direction.

•    Connect the water pipes with the taps outside the building and spread them so that the perimeter of the building is covered.

•    If visibility is reduced, switch on the interior and exterior lights of the building in order to be more visible through smokes.

If fire is next to your doorstep

•    Don’t give up your place unless your escape is completely secured.

•    The possibility of survival in a building constructed by not inflammable materials is great. On the contrary it is small inside a car that lies in smokes and flames.

•    Enter the house with your whole family and pets.

•    Close all the doors and windows and block up all the cracks with wet clothes.
Remove the curtains from the windows.

•    Move any furniture into the center of the residence away from windows and exterior doors.

•    Close all the doors in between, to retard fire spreading in the building.

•    Fill up the baths, wash-basins and buckets so that you have spare water.

•    Gather all together in one place

•    Keep a torch and spare batteries at hand in case of electric power failure.

•    If your house is made of wood, seek shelter in a neighbouring building.

•    If advised to evacuate the area follow strictly the instructions and the routes suggested.

As soon as the fire extinguishes

•    Get out of the house and at once put out the remaining small spots.

•    Control for at least 48 hours, in fixed periods of time, the perimeter and the exterior spaces of the building for possible small spots and re-ignitions.

Greece occupies an area of 130,875 km2 at the southern tip of the Balkan Peninsula. Its population is approximately 11 million. Nearly half of these people live in the two largest cities, Athens and Thessaloniki. The country’s topography is mostly mountainous. The tallest mountain, Mt. Olympus is 2917 meters tall. Small plains and valleys lie between the mountains and constitute the main agricultural areas. The mainland is surrounded from the East, the South and the West by the sea which is interspersed with more than 1400 islands. The total coastline is officially 13676 kilometers.

The climate is typically Mediterranean over most of the country, with warm-to-hot summers and mild winters. Usually there is little or no rain in the summer, but quite often the dry season may start as early as mid-May and continue well into fall. Only some of the wettest locations at high elevations have more than 100 days of rain per year. Yearly precipitation may exceed 2,000 mm at those locations. On the other hand, the southeastern tip of Greece, including the area around Athens and the Cyclades Islands in the Aegean Sea, has annual precipitation of less than 400 mm, which is one of the lowest in Europe.

Mean yearly temperature varies between 14.5 oC in the north and 19.5 oC on the southernmost island of Crete. Absolute minimum temperatures at high elevations in northern Greece may approach -25 oC. In the summer, maximum temperatures occasionally reach 42-44 oC at various inland locations. The influence of the Mediterranean Sea that surrounds the country on three sides helps moderate the air temperature in most areas.

Forest vegetation reflects the climate and topography of the country. It is very rich and diverse, ranging from few desert-like areas, to typically Mediterranean ecosystems at low to medium elevations, to central-European like forests on the mountains, up to alpine vegetation at the top of the tallest mountains. In many places a road trip of less than an hour is enough to cross all this range of ecosystems.

Wildfires constitute a major problem in the country as in all other Mediterranean countries of Europe. The fire season starts from May, peaks in July and August and continues until the end of October. During this period fire use in the open is banned. The yearly number of fires that burn forest lands varies between 2,500 and 3,500. However, if agricultural burns and other fires in the countryside are also counted, the yearly number of fire starts exceeds 8,000-12,000. There is clearly room for improvement in fire prevention. Prevention efforts should focus on the fires starting in the summer under adverse fire weather conditions. Although the number of fires changes relatively little from year to year, the yearly burned area tremendously as a result of the overall weather-influenced difficulty of the fire season.