Firefighters in Greece on Saturday succeeded in bringing two large wildfires in Athens and the Peloponnese under control, but an off-duty police officer is believed to have died in the flames. A body found in the Athens district of Kareas, where the fire broke out on Friday, was confirmed to be a missing 47-year-old police officer, who was on leave and had failed to return home from a walk in the area according to his wife.

“The deceased is a 47-year-old officer declared missing on Friday,” the police said. Two men, a Greek and a Bulgarian, were arrested on suspicion of accidentally starting the wildfire that ravaged the capital’s northeastern outskirts, the fire department said. The two suspects, aged 67 and 58, had allegedly lit a fire to smoke bees out of their hives in order to collect honey. 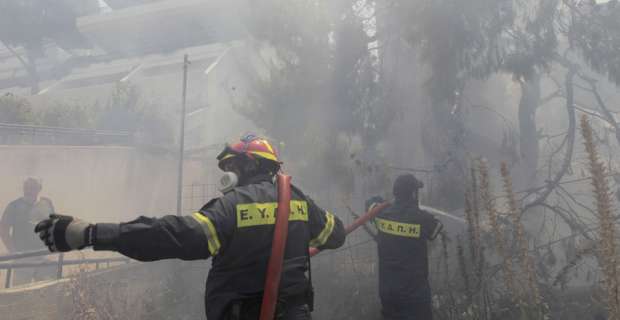 Friday’s fire in Kareas, at the foot of Mount Hymettus, quickly ripped across several kilometres, threatening homes in another three districts before it was brought under control.
Another fire in the southeast of the Peloponnese peninsula, near the coastal town of Neapoli, destroyed 35 homes and agricultural land, state ERT television reported.
A satellite picture of Greece released by the European Commission showed both fires, with the smoke cloud from the Peloponnese fire covering an area the size of the island of Crete.

Overall, nearly 80 fires broke out in Greece on Friday, the fire department said, prompting the government to request aid from Europe.
Frances interior ministry said it was sending Greece two Canadair water-bomber planes and a reconnaissance aircraft.
New fires broke out Saturday on the islands of Skyros and Zakynthos and near the town of Distomo in central Greece.
Authorities have warned that the risk of fires remains high owing to strong winds.