Four firefighters were injured on Saturday (13/9) in a fast-moving wildfire in Northern California that forced the evacuation of thousands of people, officials said. The firefighters suffered second-degree burns as they battled the so-called Valley Fire, in Lake County, north of San Francisco, said Cal Fire spokesman Daniel Berlant.

The Valley Fire broke out on Saturday afternoon and quickly spread to 10,000 acres (4,047 hectares), the California Department of Forestry and Fire Protection (Cal Fire) said on its website. The firefighters had been dropped off by helicopter to build containment lines. They were airlifted to UC Davis Medical Center in Sacramento where they were listed in stable condition, Berlant later said on Twitter. 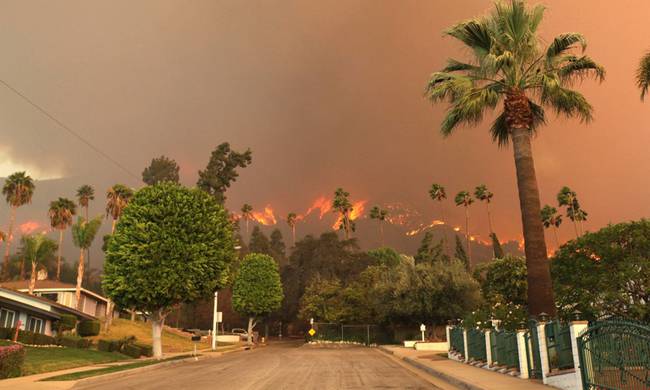 The explosive growth of the Valley Fire forced authorities to order mandatory evacuations of a number of communities, including all of Hidden Valley Lake which has about 5,500 people, according to a Lake County Sheriff’s Office statement. About 100 miles (161 km) to the southeast, the so-called Butte Fire has destroyed 86 homes and 51 outbuildings in rural Amador and Calaveras counties, where it covers an estimated 65,000 acres (26,305 hectares), officials said. It is only 15 percent contained.

Thousands of residents in the area were required to evacuate on Friday, and the blaze threatened more than 6,000 structures, officials said. More than 3,800 firefighters were working to contain the fire, which erupted on Wednesday near the former gold mining town of Jackson.

Flames from a larger blaze, dubbed the Rough Fire which is burning in Kings Canyon National Park in central California, had forced officials to order about 3,500 to evacuate by Friday, said Jim Schwarber, a spokesman for the team handling the blaze. Firefighters on Saturday intentionally set low-intensity fires in a famed grove of giant sequoia trees in Kings Canyon National Park to remove vegetation and protect the grove from the wildfire, Schwarber said. The giant sequoias themselves are naturally flame-resistant, officials said.

More than 2,900 firefighters were on the front lines of the blaze on Saturday, with containment listed at 29 percent, officials said. Ranking as California’s largest active fire, the Rough has scorched about 128,800 acres (52,000 hectares).