TEMAX S.A. is a completely privately owned company which was founded in 1965 as a leading industry of Fire Fighting Vehicles and special purpose truck bodies. Today, TEMAX is the major fire truck manufacturer of Greece.  Its many years of experience, its quality craftsmanship, its close cooperation over the years with the largest truck chassis manufacturers, as well as global manufacturers of fire fighting equipment have established TEMAX internationally in the field of fire truck manufacturing.

TEMAX is also involved in the manufacture and trade of special purpose vehicles and relevant equipment such as:
•    snow clearing equipment for vehicles
•    ambulances
•    armored vehicles
•    airport ground support vehicles
•    other specialty vehicles 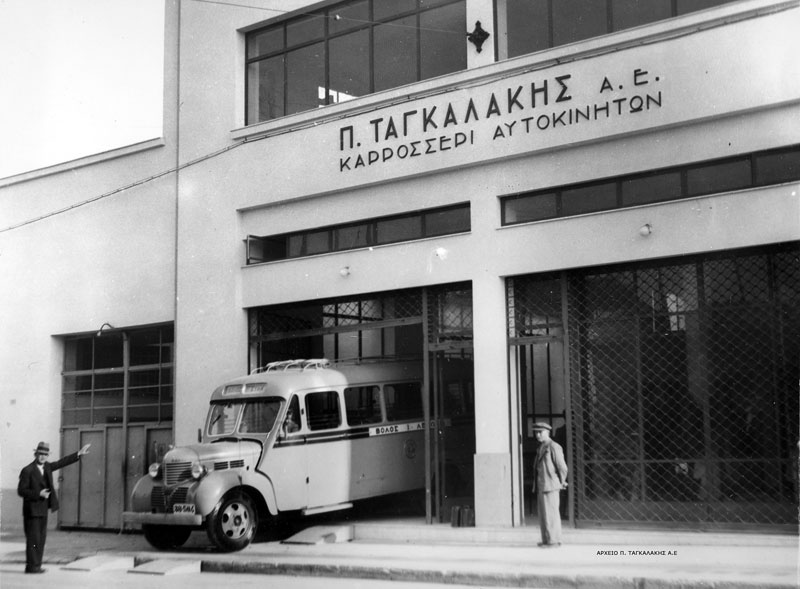 TEMAX SA has established and applies a quality system for the design, manufacture, trade, service, modification and maintenance of Fire Fighting, Rescue and Special Purpose Vehicles as well as relevant equipment in full compliance to ISO 9001:2008, certified by TÜV NORD since 19/01/2004.

1939-1940
In 1939 a subsidiary company under the name HELLENIC STUDEBAKER PRODUCTS Co. was established, for the distribution of the STUDEBAKER cars and trucks in Greece.
At the same time P. TANGALAKIS AUTO BODY Mfg. Co. continued the production of buses and luxury coaches until October 1940 when Greece entered World War II.

1945
Both companies resumed their activities after the war, in 1945.

1946
In 1946, P. TANGALAKIS Co. became the first manufacturer to build an all-metal bus body in Greece, which has been very well accepted in the Greek market. 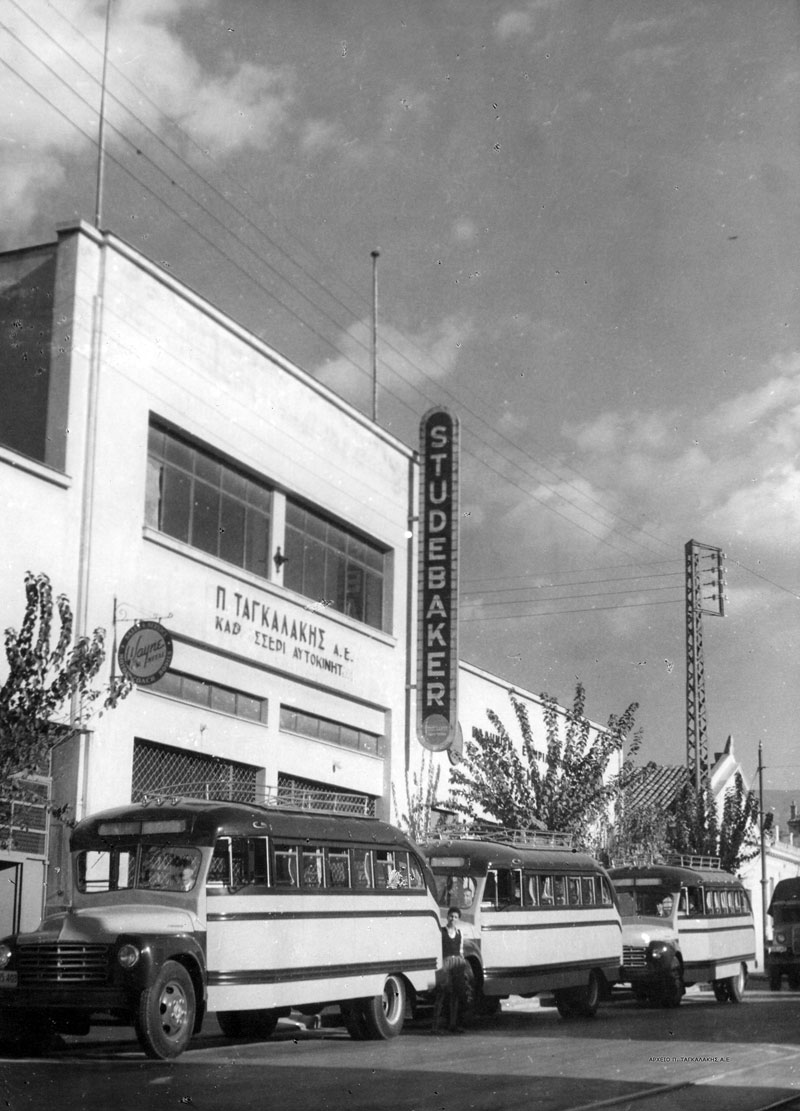 1953
In 1953 P. TANGALAKIS AUTO BODY Mfg. Co. invested for a 50% participation in a newly established company under the name of Panas Bros. & Co., to act as the exclusive distributors for VOLKSWAGEN products in Greece until 1971. In 1971 the company stopped being the exclusive distributor for VW products in Greece, but maintained a VW – AUDI authorized dealership with automobile sales, spare parts depot and service facilities until 1983.

1961
In 1961 a merger between P. TANGALAKIS AUTO BODY Mfg. Co. and the HELLENIC STUDEBAKER PRODUCTS Co. resulted in the present company, under the firm name of P.TANGALAKIS CORPORATION.

1963
In 1963 a subsidiary company was established under the name of GENERAL IMPORTS Co. Ltd., which became the exclusive distributors for INTERNATIONAL HARVESTER motor trucks in Greece. This firm was very successful in selling trucks, buses and special purpose vehicles, such as fire fighting vehicles, air crash tenders and aircraft refuellers to the government and military services. 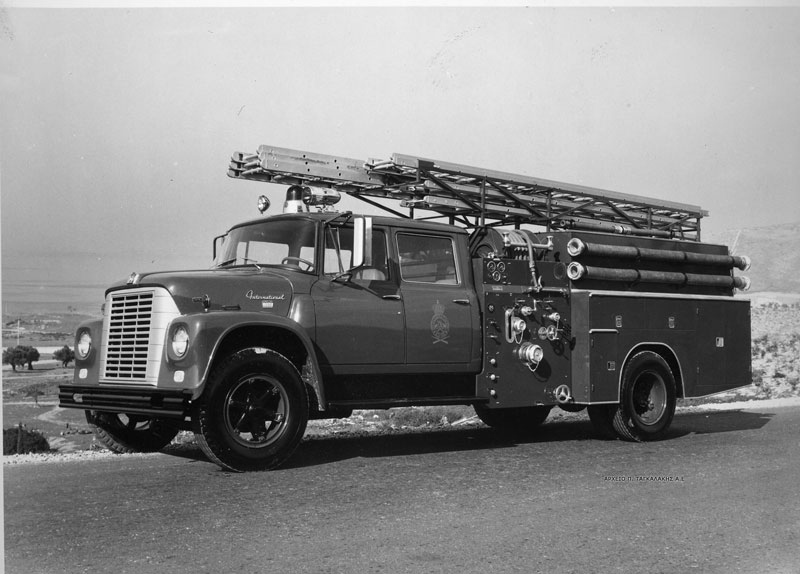 1967
A newly established cooperation with Konrad Rosenbauer KG, an Austrian manufacturer of fire fighting pumps, equipment and vehicles changes the design of fire fighting vehicles from the original US based prototype over to the European standard.  P. TANGALAKIS CORP. has since then been the exclusive distributor for Rosenbauer products in Greece. 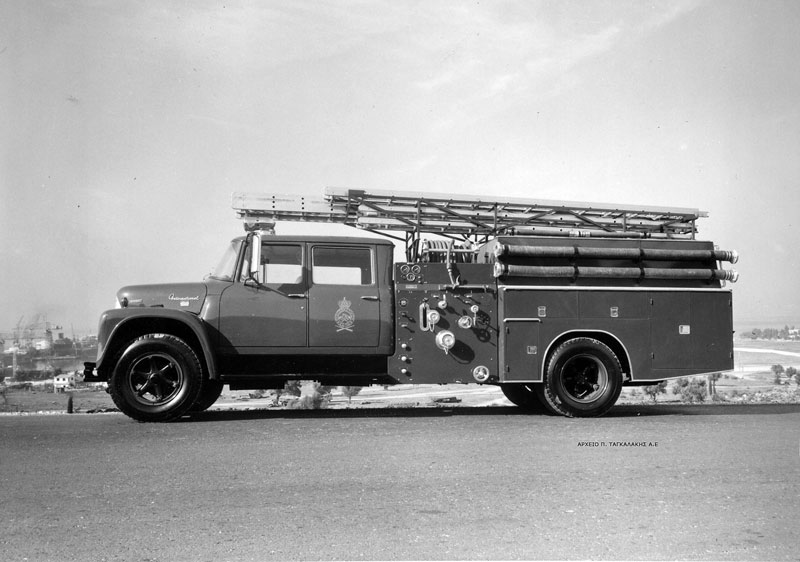 1969-1970
TEMAX LTD. acquires its own property and a new factory was built at its current location.

1979
The first spray booth for trucks in Greece was installed by TEMAX at its premises.  The 300 cubic meter spray booth remained the largest one in Greece for quite a few years. 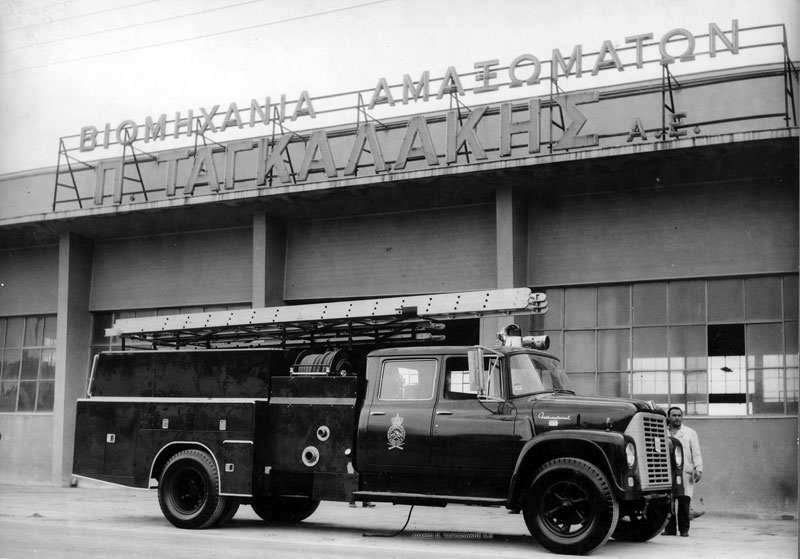 1980-1990
TEMAX manufactured the first airport fire fighting and rescue vehicle in Greece and distributes more than 70 such vehicles all over the Greek airports.

1990
The largest single order in the company history until 1990 was realized for 60 forest fire fighting vehicles built on Mercedes Benz Unimog chassis.  200 Unimogs were built by TEMAX by that time. Temax controlled appx. 80% of the local market by 1990.

2003
CAD design was applied on all TEMAX products.
In view of the organization of the organization of the Olympic Games in 2004 in Athens, TEMAX S.A. was chosen as one of the suppliers of fire fighting vehicles destined for the security of the games.  At the same year, TEMAX acted as a sub supplier of Rosenbauer International A.G. for fire fighting vehicles destined for the Olympic Games security.  The same year, TEMAX became the authorized service center for Metz Aerials (turntable ladders built in Germany) and Bronto Skylift (hydraulic platforms built in Finland), apart from Rosenbauer vehicles and equipment.

2004
TEMAX S.A. established and since then applies a quality system for the design, manufacture, trade, service, modification and maintenance of Fire Fighting, Rescue and Special Purpose Vehicles as well as relevant equipment in full compliance to ISO 9001:2008, certified by TÜV NORD.