No casualties have been reported from a strong earthquake measuring 5.8 on the Richter that rocked the Ionian island of Cephalonia on Sunday, though the tremor damaged parts of the road network and a number of older buildings, local authorities have said.

The quake, which struck at 3.55 p.m., was felt in several parts of Greece and as far away as Karditsa in the north. It has been followed by a series of aftershocks measuring between 3.5-4.4 Richter. Rockfalls have closed down some of the island’s roads and a number of old buildings in the village of Pallikis, including a retirement home, suffered damage. The residents of the retirement home have been evacuated while the extent of the damage is assessed. 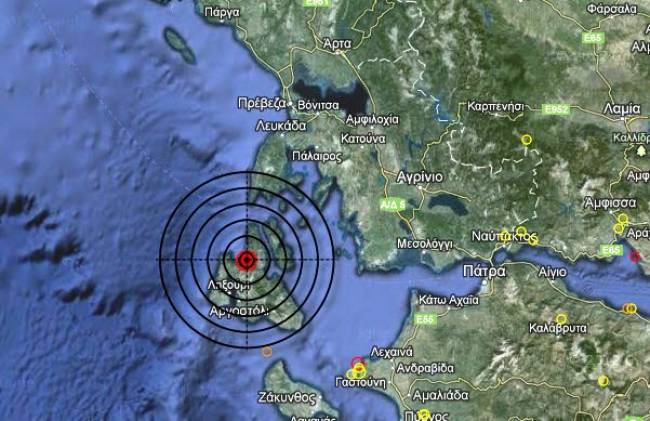 The epicenter of the quake was some 11 kilometers from the island’s main town of Argostoli and 2 kilometers north of the town of Lixouri. In both towns there were reports of broken windows at stores and residences.

The local soccer ground has reportedly also suffered a deep rift, as have parts of the road network. Interior Minister Yiannis Michelakis flew to the island by helicopter to inspect the impact of the quake. “We are at the stage of recording the damage. The earthquake was felt across the island and rattled the local residents,” the island’s deputy mayor, Evangelos Kekatos, told the state-run Athens-Macedonia News Agency.

Kekatos said that all municipal services have been mobilized to inspect the island and record any damage. Emergency crews have also been dispatched by the Public Power Corporation to restore damages suffered by parts of the electricity network that caused blackouts. Authorities declared a state of emergency and ordered that all schools remain closed on Monday.