The president of the firefighter union of Western Greece Vasilis Fertakis made serious allegations about the Fire Brigade’s effectiveness, in light of the tragic death of a 33-year-old firefighter in Paleo Faliro.

Mr. Fertakis told patranews.gr that the Ministry of Public Order last updated the Fire Brigade’s equipment in 2008. Since then, many uniforms, helmets and boots have expired, making the equipment unsuitable and potentially dangerous.

The union president claimed that the state is content with sending condolences via telegram, while refusing to accept firefighter demands for greater protective measures. Mr. Fertakis commented that a firefighter who was recently seriously injured in Aetoloakarnania and is being treated in an intensive care unit has not received any support from the Ministry. 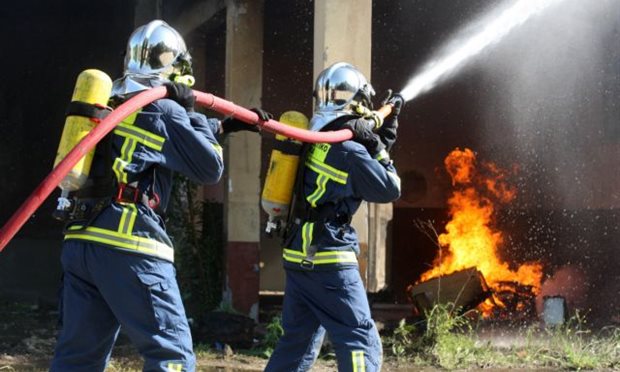 Heroic firefighter sacrifices own life in the line of duty

A 33-year-old firefighter, Mattheos Mantzios, tragically lost his life in the line of duty on Friday night, when he attempted to rescue the life of a 44-year-old woman who was trapped in a flaming building in Paleo Faliro.

The fire broke out late at night in the ground floor of a plumbing and heating goods store in Paleo Faliro and quickly spread throughout the building due to explosions caused by acetylene gas canisters in the store. The Fire Brigade dispatched 43 firefighters and 16 vehicles to tackle the fire. Due the explosions, the elderly mother of the store owner was trapped on the first floor, while the owner’s 44-year-old wife was trapped on the second floor. Mantzios and a colleague of his entered the flaming building managed to rescue the elderly woman from the first floor, before proceeding to the second.

About two hours later the fire fighters managed to set the fire under control, but unfortunately the 33-year-old firefighter succumbed to the thick smoke and did not manage to make it out of the flaming building on time. His body was found on a balcony, near the body of the 44-year-old woman.