A few days ago, I attended day one of The Emergency Services Show 2015 at the NEC Birmingham.

I decided to write this up for a number of reasons (in no particular order): firstly, it was a great experience that I would like to share, secondly it got me thinking about how this industry could be affected by various fascinating recent developments and thirdly, well, I just want to start writing a little more. I hope you find this interesting and I welcome comments!

The show obviously catered for all the emergency services but my main focus here is on the Fire & Rescue Service. The short reason for this is my role in the London Fire Brigade but also that I am a member of a Volunteer Fire & Rescue station called OEDD in the municipality of Kifissia in Athens, Greece (currently living quite far away from it (!) but I remain involved).

I took the train from London Euston to Birmingham International and after a short walk and wait was past the entrance into Hall 17, armed with my floorplan and empty bag that was begging to be filled with marketing freebies and leaflets that would probably weigh me down on the way home. I was encountered by what at first seemed like an overwhelming amount of people and products that either carried famous brand names (Dräger, Scott Safety, Rosenbauer etc) or were unbeknown to me but provided an innovative, realistically applicable benefit or a marginal gain in the effectiveness or efficiency in fighting a fire.

I won’t dwell on most of the actual products. You can see a full list of exhibitors here and I’m sure there with a bit of Googling you’ll be able to find in depth technical reviews on everything that was present.

The highlights of the show for me where the the drones and the helmets with integrated thermal imaging cameras and Head-up Displays. Here are a few pictures: 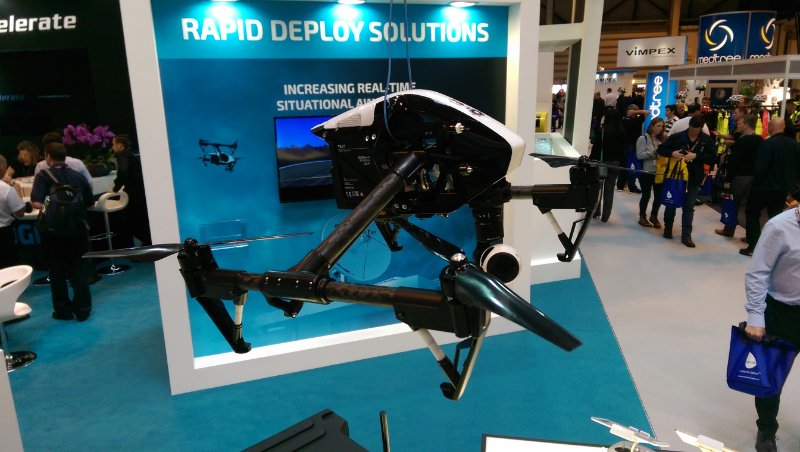 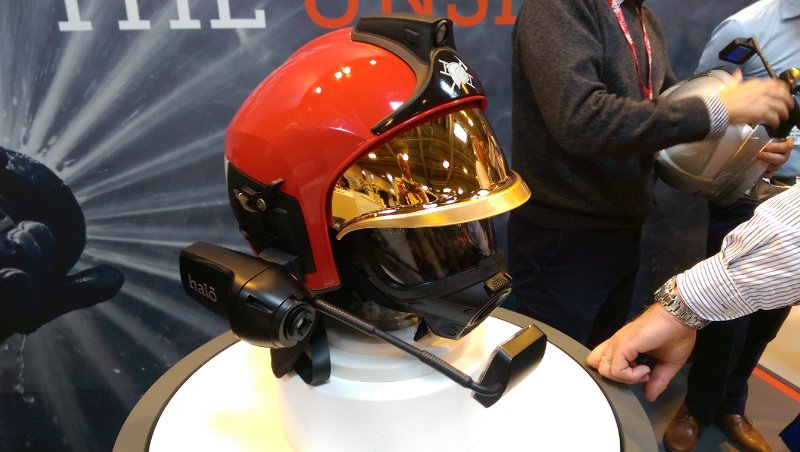 These products fuel so many ideas about delivering real-time insight right to a firefighter’s Head-up Display or to an Incident Commander’s tablet. Do you think this is a case of information overload or a seriously useful tool? Is there a “time and a place for everything”? Where does the balance lie?

Data is obviously a proven resource that can drive decision making and support change. On an incident ground it is obviously essential, perhaps not in the form of spreadsheets (save that for later) but in the form of insight. Live, accurate, essential information delivered in an understandable, simple, legible format and on an intuitive platform. On top of that, in order to be insight a.k.a an understanding of relationships that sheds light on or helps solve a problem (dictionary.com), it would have to magically offer some calculated suggestions and potential resulting outcomes. This could actually support decision making under pressure and ultimately help achieve a positive outcome.

Regarding change, I wrote about this in university. Two of the factors that I argued influence change were “openness” and “transparency”. Data has the ability to bridge the gap between people that are effecting change and people that will be affected by change.

However it can also be dangerous when misunderstood or misinterpreted. Allow me to borrow a term used in the three pillars of data science that is labelled “Domain Knowledge”.

Ignore the computer science and the maths and statistics for a minute: For insight to be really useful in a fire situation it needs the Domain Knowledge component.It also needs to be actionable. After all, who would really like to be reading pie charts when crawling through a smoke logged corridor?

Enough data stuff already! Here’s a few more cool things I saw; huge touch-screens on stands that could be rotated flat and act as a table (who hangs their chess board on the wall?): 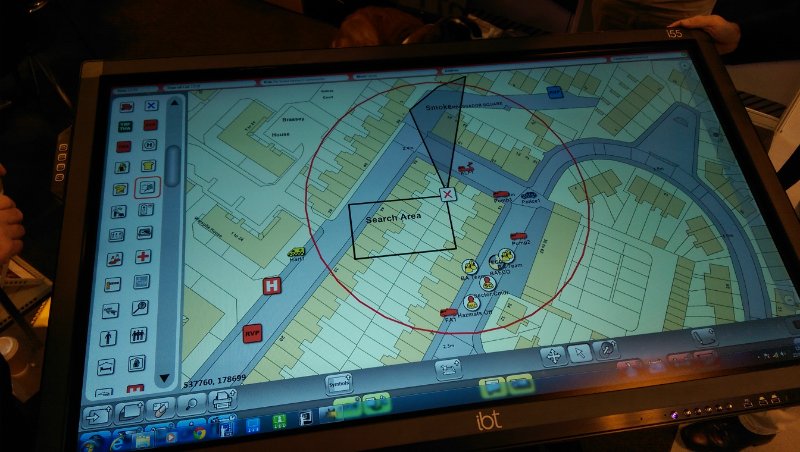 Moving away from dreaming about seamless tech integration and “holy grail” insight and on to the physical: I saw the world from the top of a Magirus Turntable ladder (look away now if you have a fear of heights!: 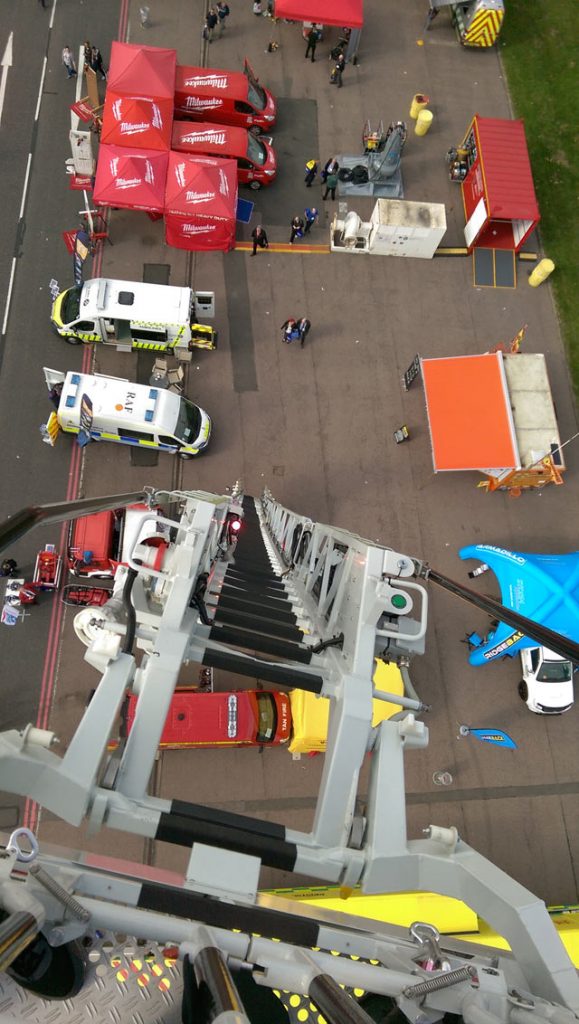 Oh, and I also met Hugo (my first encounter with a St. Bernard!): 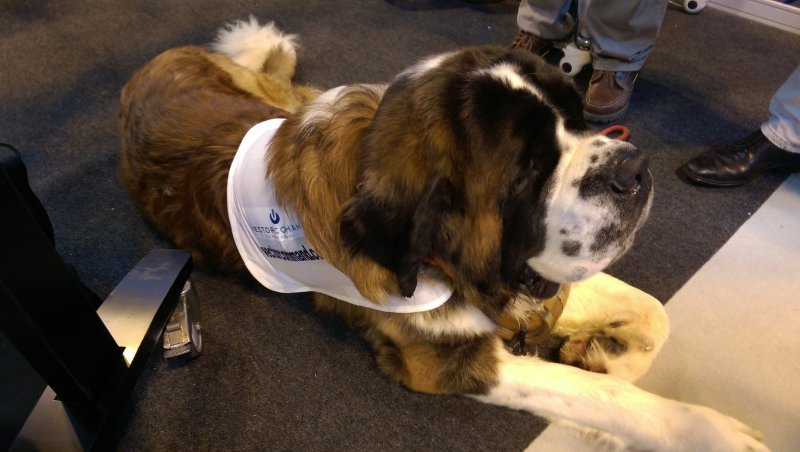 I need to talk about one other development that I had a lot of time for. West Midlands Fire Rescue Service in conjunction with Delta Fire developed a firefighting “Floor Below Nozzle” i.e. a nozzle that enables, as Delta Fire say, “to mitigate against one of the greatest dangers facing fire crews when dealing with High Rise fires when it comes to entering a room to deal with a fire inside.”

The nozzle “is specially designed to be long enough to protrude out of a lower window where the long, angled barrel is raked upwards and fires a powerful, solid jet of water through an upper window, hitting the ceiling and providing fast, efficient gas cooling prior to fire crew entry.” Trials were carried out and the results were that in 20 seconds a room was cooled from 600 degrees to 90 degrees “without the need for personnel entry.” 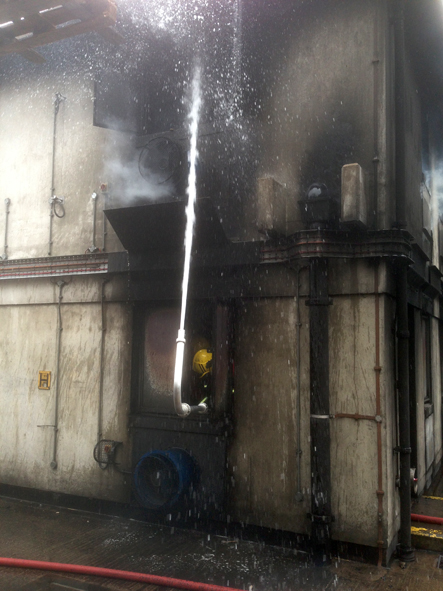 What was interesting apart for the fact that this is a grass roots development is the role data played in the decision making processes involved in research and development but also in its deployment. Specifically, historical incident data regarding High Rise fires was analysed and used to drive its development, testing, trialling and deployment. Not only from a macro perspective but also individual incidents and experiences.

Regardless if you like this idea or not, once again the marriage of quantitative and qualitative data wins, hands down.

As I slowly navigated the room (at first alone and later with my friend Kimon Pantelides whom I know from school but also from OEDD) I noticed an underlying theme. Everyone was there for the same reason (whether they knew it or not!) They were all members of an industry that has underlying values of helping people to prevent bad situations and protecting them and helping them when those situations occur. Proud to represent LFB amongst people far more knowledgeable and experienced than me.

I suppose the lingering question I have now is whether, just like in the office, insight on the incident ground should not only be information but must also offer suggestions for action and potentially predict potential outcomes? In real-time. Is this even possible? Some have suggested recently that it is often difficult to process and make sense of the information incident commanders get due to high time constraints at an incident. However the drones, the Head-up Displays, the cameras and the touch screens all suggest that it is—or it will be soon.

P.S. NEC: your venue is amazing but a BLT really shouldn’t cost £5 😉