Researches have shown that professions as firefighters, policemen, soldiers, EMTs and Paramedics and generally who ever is employed in law enforcement and rescue services is more likely to develop PTSD that the rest of the population. Vice versa there is a higher possibility to have contact with people that are under shock in ambit of a psycho traumatic situation. The PTSD has to do, most of the time, with psycho traumatic incidents or situations that are hard for someone to deal with, with the existed defensive mechanisms and it is very hard to deal with the incidents at the time that they are happening. People who have experienced, directly or not, incidents like terrorist attacks, natural disasters, violence or are witnesses of situations that can be classified as traumatic in their minds, can suffer from PTSD.

In the cases that we mentioned above, and especially for the firefighters, the working conditions demand from them to be alerted  in order to be ready to deal with a stressful incident at any time. But in the same time they should have the proper knowledge and experience in order to be calm and to be able to deal with the “other people” during a stressful and traumatic process.

The term mass disaster refers to an incident that happens with no prior warning, it is violent, it has a big impact zone and a lot of casualties (Zagelidou Leontari, Issue 3, 2006-2007). This incident may be due to natural causes (fires, earthquakes, floods, etc) or it may be manmade (car accidents, nuclear accidents, terrorist attacks). A mass disaster creates a lot of needs such as need for psychosocial support, medical treatment, housing and nutrition issues. Every engaged member, with the most responsible of these to be the Fire Service and the Fire Service Disaster Unit, must be ready to offer the needed support to people who lost their relatives, their houses and generally they nearly lost their lifes. 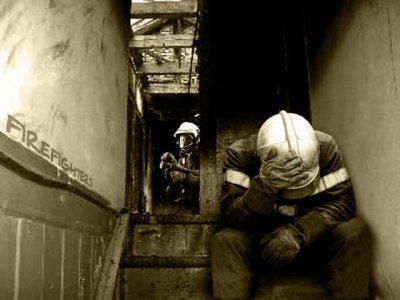 From this point of view the first person who see the victim of a mass disaster is a firefighter. When a mass disaster occurs people acting under stress and the handling of each case is unique and tough. The psychosocial support is very important but the need emerges only when the disaster is nearly over. The victim during the time of the disaster – after receiving first aids – and in a psychological point of view should be relocated to the presence because due to the shock may a lack of awareness may occur. Most possibly it would be better if we act in a way that help the victims to understand what is happening and how they can help themselves according to the existed data and the particularity of the conditions. That can be achieved by explaining the different reactions of the victim’s system, because maybe it is hard to understand them. In the meantime it would be helpful to seek for eye contact and with basic breath relaxing methods and methods of relocation in the present time  (methods that include counting). That is how we can try to achieve the mental balance ( although it is tough practically and psychologically). At the end we can also ask questions about their relatives (for example where is this person) but the questions should be controlled for obvious reasons.

In the meantime after the psycho traumatic incident the person may develop PTSD. Except from the normal symptoms that come with PTSD – such as being irritable, trying to get away from situations or persons that may remind the incident, suffering from psycho movement excitability and stress as well as the recall of random – very often the stress is escalating through covered reminders of the incident. More specifically, concerning that every person acts based on the complex parts of an experience and according to his personality, sounds, images zoomed in one certain detail (that the persons see every day in his life because of a different experience or image), scents and bodily symptoms should be detected and processed before the procession of the incident itself.

Considering these information, the psychosocial support should be structured in a way that complies with these individual pieces of information and at the same time to be combined with the efforts for fulfilling basic needs such as housing and nutrition, with the purpose of achieving the desirable outcome, either short term, or long term.